‘”But murder, Seth?” Mike said, his head spinning. “I can’t imagine that some government bureaucrats would get together and say, “Should we yank their funding? Nah, let’s send in the hit squad.”‘ 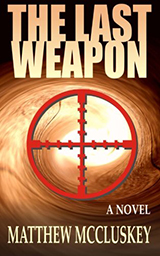 In The Last Weapon, physics professor Mike Harris finds himself in over his head. After an experiment goes horribly and tragically wrong, Mike finds out that the “accident” wasn’t an accident at all. As all of the participants are killed off, Mike is framed for one of the murders. He must run for his life while being pursued by several shadowy organizations and the local police force. Meanwhile, a powerful corporation has planned a monstrous undertaking using the experiment Mike and his colleagues developed. Who is playing both sides? Is there anyone Mike can trust?

Matthew McCluskey’s debut novel The Last Weapon is a science fiction fueled mystery/thriller. There is plenty of hard science woven into the story making it an engaging read for those with a physics background. Action is plentiful as Mike and his companions face gunfights, car chases, technologically advanced weapons and goons dressed in black. The novel touches on government corruption and secret societies with unimaginable pull. Although, the large amount of action sequences start to seem over the top, particularly when a scientist manages to come out nearly unscathed despite a distinct lack of super spy training.

McCluskey’s familiarity with physics shines through the narrative in his very detailed explanations. Some readers might find the sheer amount and technicality in this aspect overwhelming, although readers with an interest in physics may find these sequences to be their favorite parts. The pacing of the story falters in places, making some sections of the novel feel sluggish, while action sequences rush past in the blink of an eye. Many of the characters may feel a bit two-dimensional for some readers, as motivations are often stereotypical, making it difficult to relate to them with any real depth. Mike, in particular, seems to lack any real character beyond his emotional regret over his ex, making him a much less sympathetic character.

A solid hard science thriller debut, The Last Weapon offers an interesting premise that prompts readers to ponder the ramifications of technological advancements and science, with good intentions, always has a flip side.