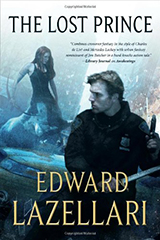 Thirteen years ago a group of people traveled through universes in order to protect their infant prince, but something went horribly wrong, and everyone ended up with amnesia and traveled their separate ways. Now, it looks like something has followed and is killing the guardians off one by one. Cal, a NYPD officer, and Seth, and porn photographer, must set aside their differences if they are to survive long enough to find out what happened to their long lost prince. As Dorn’s sanity begins to wane, his desperation reaches new levels, and he casts a desperate forbidden spell that may destroy them all.

“He did know that a bolt of lightning hurled toward them across the sky – whether it hit true was irrelevant, Lelani could not get off the fence in time – she would fry.”

The Lost Prince by Edward Lazellari is the second book in this series, and is full of adventure, magic, and intrigue. Lazellari successfully blends elements of several genres, including science fiction, fantasy, and young adult. The characters are well developed, as are their relationship conflicts. The writing is dynamic, fast paced and engaging. The Lost Prince wraps up the main conflict that begun in Awakenings, but sets the stage for an even bigger battle as the guardians prepare to join in the fight to save their country, universes away.