The Most of Nora Ephron 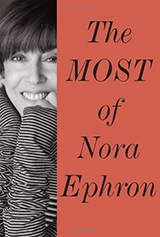 Nora Ephron, who died at the age of 71 in 2012, was a prolific and popular social commentator – first as a journalist and later as the author of screenplays, essays and blog postings. From the beginning, her writing was distinctive not only for the subjects she chose to cover but for her personal brand of dry humor. Some readers became fans through her movie scripts or her best-selling essays on aging; others simply followed her career, enjoying everything she wrote.

“She was funny, even when she was furious…”

Rather than trying to compile a subjective list of the best – because it was all good – friend and collaborator Robert Gottlieb with the approval of Ephron’s family, presents a little of everything she did: newspapers and magazine stories from the 1970s, the full-text of Heartburn, When Harry Met Sally, and Lucky Guy, along with selections from I Feel Bad About My Neck and Wallflower at the Orgy as well as blog postings on such diverse topics as parenting, email, having people over for dinner, and the U.S. president’s annual physical examination. Highly recommended for both longtime fans and new audiences.