The Skull and the Nightingale 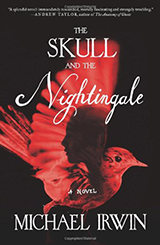 Michael Irwin’s The Skull and the Nightingale is a Victorian era study of human nature. Richard Fenwick, an orphaned young man dependent on his godfather James Gilbert’s goodwill, receives an interesting proposition from Gilbert upon returning to London. Having led a sedate and reclusive life in the country, Gilbert wants to experience the seedier and more exciting sides of London, using Richard as his proxy. Supplied with a sufficient income to live as a man about town, Richard is at first excited by the proposition, but quickly begins to see himself as a pawn as his grandfather’s urges and machinations become more demanding.

The power play between the two characters is fascinating, particularly as Richard tries to keep some of his life private. The writing style of this book strongly emulates books printed from the eighteenth-century, helping to create the sense of the world. Descriptions of everyday life for a man about town are well constructed and engaging. The slower paced narrative, characteristic of the time in which this book takes place, may drive some readers away, however, The Skull and the Nightingale is a solid and beautifully descriptive book for fans of historical fiction.