The War of the Moonstone 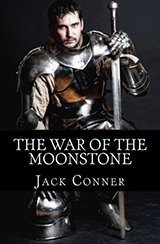 Pulp Fantasy for the Right Reader

The War of the Moonstone: an Epic Fantasy (The Song of the Broken World: A Dark Fantasy Adventure Series) by Jack Conner is the story of a kingdom, a wolf lord, his demonic hoard, love and magic. It has a complex storyline and is rich with backstory. The characters are the half-elven priestess Niara and her lover, Giorn, son of the Baron of Fiarth. Evil plagues the kingdom of Felgrad and Niara and Giorn must stop the spread of the power of the Dark One or all will be lost.

“The fiery eyes fixed on Vrulug, and the wolf-lord swallowed, bowing. ‘It has begun, my Lord.’ ”

First of all, this book stands fine on its own, but could easily receive harsh criticism when compared to George R.R. Martin and J.R.R. Tolkien’s works. Conner does just that in the book’s description. That said, Moonstone has a lot of action, violence, some sex and an almost pulp fiction tone mixed with typical high fantasy-esque language. The overly complicated character and place names all scream, “This is a fantasy novel!” And the plot often feels very outwardly imposed. It can be a difficult book to follow, as the author does not always give the reader enough information, or else gives too much.

Moonstone seems aimed at a certain type of reader: a fan of high fantasy, probably into gaming, who enjoys a lot of hardcore action and violence as well as the overblown high-fantasy writing style, and appreciates the challenge of complicated names. Someone who prefers their fantasy to be less overblown and fantastical, who leans a little more towards the literary, might not be so turned on by the graphic violence and descriptive nature of the storytelling.

In short, it’s everything you’d expect from a book that tries to be a mash-up of Tolkien and Game of Thrones. If considered aside from that, Jack Conner’s book is a good pulp fantasy read, for the right reader.