The Wolves of Midwinter: The Wolf Gift Chronicles 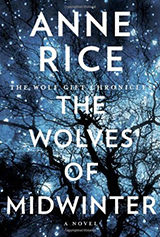 A Season of Lazy Werewolves

Anne Rice’s The Wolves of Midwinter is the second book in her Morphenkinder series. After Reuben Golding’s adventures in the first book, he is looking forward to a real holiday, as Felix and the other Morphenkinder stage a holiday party to a scale that Nideck Point hasn’t seen in ages. Unfortunately, the sorrow from the previous adventure hasn’t lifted and Reuben finds himself haunted by a ghost of a dear friend and conflicted by his feelings over his girlfriend Laura’s decision to join him in immortality.

The strongest points in The Wolves of Midwinter were in Anne’s descriptions of the forest and the holiday preparations. Despite the beautifully rendered scenery and almost tactile descriptions, this was a novel in which very little actually happened. The werewolves themselves are largely uninteresting, and while they seemed to be almost guided into hunting for evildoers, seemed to want to repress their desires in order to live a hidden and reclusive life. Reuben’s nearly overwhelming attachment that he develops with almost everyone he meets is extremely tiring. Fans of Anne Rice’s older works may find that The Wolves of Midwinter isn’t quite up to par with other books she has written.