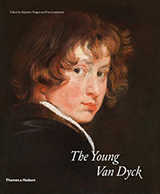 He was one of the major Dutch painters of the early 1600s. While his life was cut short, his career was prolific and amazing. His early works would be impressive if they were just the complete portfolio of his talent. But his early years are just a small number of paintings compared to the rest of his life. In this catalog of early Anthony Van Dyck paintings on display at the main national art museum in Spain. We get to explore his world, his life, and his upbringing; how he created his art, and who influenced him. He started off young, and never looked back. Some of his early works are studies, and models that he would use later on in his historical pieces. Other works were commissions of the people of the Netherlands at this time, and interesting glimpse to how some people dressed.

Like most catalogs this is split into a couple of sections. The first part is essays that explore his life, art style, and his technical prowess. The second half examines each picture individually, with a brief historical background and then a further exploration of that particular theme of the piece in question. This is defiantly a book for art lovers.