Theresa Bernstein: A Century in Art 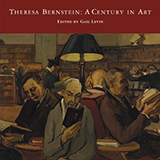 Women artists of the early 20th Century struggled to be viewed as equals to male artists; since they were viewed more in connection with their husband’s careers and never taken seriously by the establishment as true artists. One of the artists that has fallen through the cracks is Theresa Bernstein, an artist who lived in New York in the first part of the 20th Century as a painter, and one who fought tirelessly to be treated like any of her male counterparts and to succeed on her own merits and not be judged as just a female artist. This book helps bring to life Theresa Bernstein, her life and her art. It features essays by several academic scholars that explore her role in society, and her role in the American art world and how she struggled against the system.

It is a book that I hope will help bring this artist out from obscurity. Her work is impressive, especially compared to her peers at the time. She was ahead of her time, and she never got the respect that she wanted, or deserve. This book will help people appreciate her art more.