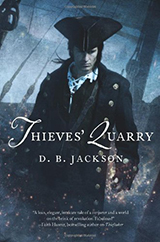 Thieves’ Quarry by D. B. Jackson is the long awaited sequel to Thieftaker. Taking place in 1768, three years after the events in the first book, Ethan Kaille has been hired to investigate the mysterious deaths of almost a hundred British soldiers aboard the HMS Graystone. With tensions in Boston at an all-time high due to the British fleet sitting in the harbor and the impending occupation, Ethan is given only five days to solve the crime or all of the conjurers in Boston, starting with Ethan, will hang.

D. B. Jackson does a fantastic job creating the political turmoil in Boston just prior to the American Revolution. The growing animosity between the colonists and the British soldiers is clearly rendered. Ethan is an interesting protagonist and despite his conjuring abilities he remains a very normal guy with plenty of hang-ups. Some readers might find Ethan’s normalcy and his tendency to knowingly run into bad situations frustrating. The world and the rules of conjuring remain largely unexplained which raises many questions that might draw readers out of the story. For fans of historical fiction and fantasy, Thieves’ Quarry is worth a read.