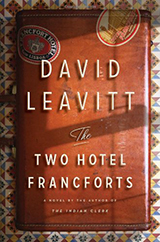 Marriage is Never What it Seems

David Leavitt introduces the reader to two wartime couples stuck in Lisbon in the summer of 1940. Lisbon is crowded with people trying to escape the war or even get on a ship and travel to America. While waiting for passage to New York on the SS Manhattan, Pete and Julie meet Iris and Edward. Pete and Julie have been living in a Paris apartment featured in “Vogue”. Julie vows she will never return to the United States. She told her family upon her departure to Paris that she would never step foot on American soil and she means it. But Julie is a Jew and Pete believes that the United States is the refuge she needs. Julie goes as far as renting a house outside of Lisbon to prove she has no intention of returning. Iris and Edward are wealthy, sophisticated writers of spy novels. Iris spends lots of time with Julie as she allows Edward and Pete to get to know each other. Edwards shows Pete an entirely different world, as well as, an undiscovered side of himself.

Leavitt’s characters are engrossing as secrets are slowly and carefully revealed. People and marriages may never be what they seem on the surface and Leavitt’s story captures the essence of things hidden and forgotten. Read this tale and see if you can guess its outcome before the end.