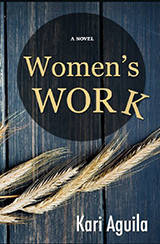 A Well Written Novel with a Perplexing Concept

In the aftermath of a war started by men, women have taken over. There are too few men left to argue and the ladies have set up a new social structure in order to “fix” things. They have created new neighborhoods, limited the basic rights of men and generally pride themselves on making things better. Men, specifically strangers, are regarded with suspicion and fear. So when a stranger comes to Kate’s door begging for help for his ill son Evan, she is wary and cautious. Agreeing to care for the boy through his illness, she begrudgingly allows Michael to stay on her porch. As Evan slowly heals, Kate learns that Michael is no threat but convincing the other women of that is another matter. Kate must also convince Michael to take a chance that the other women will accept him into the neighborhood and prove that she trusts him as well.

Women’s Work is a dystopian novel by author Kari Aguila. The idea of a world in which women have taken over is an intriguing one. How the women in the novel have chosen to run things, though, is perplexing. After having their rights and privileges taken away from them for years, they turn around and take away the rights and the privileges of the men. In the novel, the men are allowed to voice their concerns only through their wives. They are not given an opportunity to vote. They are not allowed to be out after dark and their function is to serve as homemakers for their wives and families. The woman also all seem to be living with a significant amount of denial as they insist that they do not see every man as a threat but run off or sometimes kill those who come too close to their neighborhoods. They insist that things are safer than ever yet everyone is scared, wary and hostile of outsiders and clearly none of them feel safe.

The writing is excellent and the author successfully creates vivid pictures of the world and characters for the reader. The character of Kate is sympathetic and relatable to the reader. The children are especially lively and it is enjoyable to read about them. The ending strives for both a realistic and happy outcome which may result in minimal satisfaction for the reader. While the writing is good, the overall concept of the novel can feel flat.