A Comprehensive Encyclopedia of Film Noir: The Essential Reference Guide 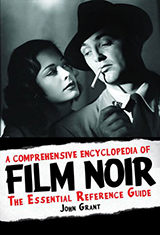 Film Noir is generally believed to have been an American film phenomenon of the 1940s through 1960s showing the dark side of the war and post war period with society unraveling. One normally is following a story here will people fighting for money. This phenomenon is distinguishable from the gangster film with the detective usually catching the criminals. John Grant in A Comprehensive Encyclopedia of Film Noir: The Essential Reference Guide writes that the phenomenon was much more pervasive and international in scope.

“Even so, almost all noirs have criminal acts at their heart, and many are set in a lowlife milieu-among petty crooks and ladies of easy virtue. And snappy one-liners abound.”

In this Encyclopedia John Grant attempts to say what Film Noir is with over 3200 movie entries. There are also photographs of classic noir, international noir, the faces of noir, and the new noir. Also included is an appendix, which list Directors, Actors/Actresses, and Authors, and their films. The book does not present a definitive historical treatment. Nor are there entries about specific subjects. Grant does cover a great deal of territory in the book as he has in his career with an impressive body of work. He also does not shy away for the occasion jibe in the movie entries. Fanatics will want more with him not saying who the villains are in the short entries. He makes you see the movies for that.