Architeture on the Carpet: The Curious Tale of Construction Toys and the Genesis of Modern Buildings 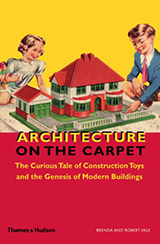 Parallel Between Toy Sets and Architecture

Architect professors Brenda and Robert Vale came up with a most fascinating concept, drawing parallels between early children’s construction sets and concurrent architecture. They describe and analyze over a dozen construction sets in their book Architecture on the Carpet and they envision how these sets influenced architects or the children to develop into architects. The idea is interesting and the book is well done. However, it is not easy to see who the expected readers would be. Not the general public as the book is more like a textbook with many superscript numbers referring to Notes at the end of the book. It’s unlikely to be architects either though the book could possibly be a reference in architectural firms’ library.

The illustrations, both black and white and color are very pretty. Many are box top pictures of old toy sets as well as illustrations of models supplied with the sets. Parallel to these models many show actual buildings that architects may have designed through the childhood influence of these sets. They give detailed history of these models, which are mostly British, German an American. The book’s font is small making it a bit difficult to read.