Bach: Music in the Castle of Heaven 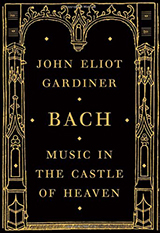 This is a superb book, but it is not for the casual reader. Gardiner himself is a conductor, who has worked with opera orchestras, and baroque groups. The book is not simply a biography of Bach, but includes details of his musical career, and extensive treatments of his music. In addition to the extensive musical details, there are fascinating details that describe the role of the musician in German culture. We learn that Bach’s everyday life involved a continual dance to satisfy his various royal and township employers.

There is also considerable discussion of the dichotomy between religious and secular music.  Besides writing, literally, a cantata a week for church performances, Bach also write music for a variety of instruments. In addition to his astounding compositional skills, he was an excellent improviser and a virtuoso keyboard artist.

For his religious music, Bach drew some of his inspiration from his extensive library of theological works. Yet the author portrays Bach as a human being, not simply a superstar composer.  Bach actually spent four weeks under house arrest , and was discharged from his job at the Weimar court. He was charged, basically, with taking too many other gigs, and leaving the court to accept these commissions from other employers. Eventually he settled in Leipzig, where he spent the remaining twenty seven years of his life. There he continued to write religious music on a continual basis, but he also accepted leadership of the collegium musicum, which entailed not only composing new works, but organizing public concerts that included the works of other composers. At Leipzig he wrote his most famous vocal works. The St. John Passion and the St. Matthew Passion. As the author puts it, “he used music both to draw new meanings out of the Gospel texts and to hint at others that might occur to him.”

Bach composed dozens of vocal and instrumental works, many of which continue to be performed today. Although he was perfectly capable of writing melodic works, what distinguishes his work. From that of his contemporaries is his use of complex harmonic patterns, and elaborately constructed fugues. Neither his music nor this book are for the casual listener or reader.