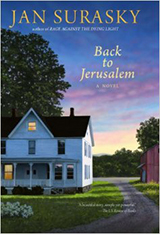 Jenny lives in the pastoral hamlet of Jerusalem, New York. As she readies herself for her high school graduation, Jenny earnestly awaits the opportunity to capture her dream of becoming a great artist. Unfortunately, with the feminist movement having yet to significantly influence her traditional hometown, Jenny finds her dream far from her reach. She is forced to set aside her artistic aspirations in order to marry and assume a domestic role. Back to Jerusalem, the second novel by Jan Surasky, tells the story of how Jenny is able to strive for independence and find love and comfort in friends, family and her bucolic home.

“No matter where you wander, no matter for how long or how far away, home is forever embedded in your spirit, and in your soul.”

Perhaps the best way to describe the experience of reading Surasky’s novel is to say that it is akin to thumbing through a treasured family photo album. Though such an album’s contents could collectively span several decades, each page contains only fragments of family history, fragments selected for their particular beauty or significance. The narrative of Back to Jerusalem is similar to this because it too spans several decades, employing many time skips. The reader is presented with only fragments of main character Jenny’s life at large, but these fragments are certainly beautiful and significant.

One of the author’s greatest strengths is her ability to present the culture of the 1970s with honesty and frankness. She uses simple, yet effective language, and introduces her audience to a cast of complex characters. What is particularly impressive is the objective manner in which the more odious characters are presented like Jenny’s mother, who forces her into marriage, and Jenny’s husband, whose indifference and infidelity destroy their relationship. These two are not simply vilified, but rather portrayed as products of their epoch and culture, a very thoughtful and mature move.

Back to Jerusalem is also a thematically dense novel. It addresses issues of gender and social class but, again, its language is simple enough that it will not alienate casual readers. On the contrary, this novel is incredibly warm and welcoming, clearly the product of a sensitive heart. Though the dialogue sometimes borders on repetitive, there is enough sublimity inside to warrant ownership in any reader’s collection.