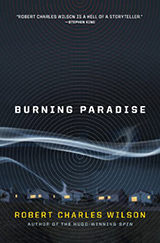 Alternate history books are all the rage these days ranging from far reaching changes, to ones where the changes are more minuet and subtle., This book falls into the latter category. It takes place in the modern age, but major events of the 20th Century never happened such as World War II. Instead humanity has been living in relative peace and prosperity for the 20th Century thanks to a radio layer above the Earth that is alive with alien creatures the size of microbes that lives in a colony formation, that subtly changes human communications, and make sure the host planet does not destroy itself. A group of humans called the Correspondence Society discover the truth and tries to take out the aliens that have been subtly changing human life for many generations.

This book feels a little uneven, it starts off fast, covers the middle way too quickly, and then has a fairly abrupt ending with very little satisfaction. Not the best in alternative history books.