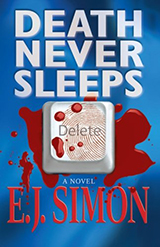 E.J. Simon has written a fascinating book. The story almost breaks new ground. It’s a good twist on Robert Heinlein’s The Moon is a Harsh Mistress in that a computer wakes up and exhibits a consciousness. This consciousness is Michael Nicholas’ murdered brother Alex, who, through an extrapolation of Artificial Intelligence, becomes a digital entity. Everything about this story has the potential to set the literary world on its ear and become an instant classic.

But there is so much more tell than show. The characters are likable and the reader wants to embrace them, but they don’t fully form. Their traits are explained instead of presented through behavior. When they do react to their world, their actions have been preordained by endless description. Their thoughts are all explained, which steals the thunder from whatever they might do or say. There are no revelations and there are no surprises.

The real story doesn’t begin until the last few pages, when the true antagonist is revealed. It is hinted at during Alex’s conversations with Michael through the medium of Alex’s “special” computer; anyone who knows how laptops work might become frustrated with how Mr. Simon portrays this interaction.

Death Never Sleeps is E.J Simon’s first novel. He has accomplished a great deal. The pages turn by themselves and we want to know more about his characters. He seems comfortable with a very cosmopolitan international world, although some of that seems contrived, at times, and doesn’t help drive the plot. His handling of action scenes is not heavy-handed, but could use less explanation and more action. Except for an early fixation on Chanel No. 5, the nose is left out of the human experiences in the novel. He creates sexual tension well, but it goes nowhere. There is certainly more to this story. If a sequel were to appear, it has the potential to be far more engaging than Death Never Sleeps.