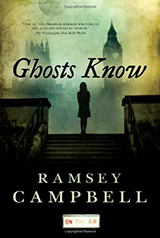 No Rest for the Paranoid

H.P. Lovecraft once noted that a horror story is only ever “a vivid picture of a certain type of human mood.” Ramsey Campbell, a renowned horror writer himself, references this comment on his webpage, and it is with such a framework in mind that one should confront his newest fiction, Ghosts Know, an unsettling battle of wills between a radio host and a psychic.

“Then I gasp, not only because Christine’s nails have dug into my arm. A head has bobbed above the water by the drain.”

When pugnacious radio host Graham Wilde attempts to expose famed psychic Frank Jasper as a fraud on air, Jasper drags him into the investigation of a missing girl. Soon, not just the psychic’s hints but a series of troubling coincidences and Wilde’s own erratic behavior begin to raise questions about his involvement in her disappearance. As Wilde’s narration cascades into irrationality and bursts of rage, the reader is left increasingly disoriented about what to believe.

Ghosts Know builds slowly, and its conjuring of the supernatural is more evocative than explicit. Ramsey subtly toys with the skepticism that the horror genre usually encourages readers to set aside, using Wilde’s increasing paranoia to further distort a reality already rendered unclear. Its subtlety never quite provides the jolt desired, but the neurotic chill it leaves is hard to shake.