How To Lose a Bride in One Night: Forgotten Princesses 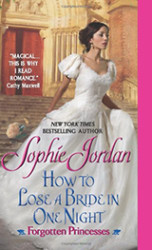 The Beggar Princess Gets Her Happily Ever After

Misapprehensions abound in the final chapter to Sophie Jordan’s Forgotten Princesses Series How to Lose a Bride in One Night. Inspired by a Chinese Folk Tale “The Beggar Princess”, this modernization is much more satisfying to a feminist reader, than the original. After toiling as a dressmaker’s assistant, Annalise Hadley is reunited with her father Jack Hadley, an extremely wealthy well traveled merchant who has already discovered that he is the father of several young ladies from various backgrounds. She is turned into a debutante and quickly captures the attention of a dowry seeking Duke with less than savory intentions. A swift courtship, leads to a whirlwind wedding and wedding night, and she wakes up nearly drowned in the back of a gypsy caravan. She then has to lie to her rescuer, an extremely handsome secretive Owen Crawford, so he won’t send her back into the clutches of her vile husband.

“She jerked her arms, trying to pull free, almost panicked to escape him before he realized how utterly at his mercy she was… that her heart was already his hostage.”

Full of melodrama from the two damaged protagonists as they try and fight the inevitability of ending up together, this is classic romance, with little to no humor in its almost 400 pages. Two more stubborn characters would be difficult to imagine. While the writing is vivid, the story meanders its way through a couple of steamy scenes to an action-packed last couple of pages. For readers who gobble up the high emotional drama of gothic novels, this is the book to read.