I Want It Now! A Memoir of Life on the Set of Willy Wonka and the Chocolate Factory 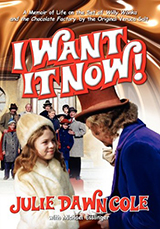 Julie Dawn Cole is known to most as the demanding and spoiled Veruca Salt, one of five children who find a Golden Ticket in a Wonka Bar and win a tour through a chocolate factory. Cole’s book I Want It Now!: A Memoir of Life on the Set of Willy Wonka and the Chocolate Factory by the Original Veruca Salt takes readers into the heart of that factory and introduces places such as “The Chocolate Room” and “The Goose Room” to fans from an actor’s standpoint and from a little girl’s standpoint. Cole brings the world and magic of Willy Wonka to life.

Cole’s book is filled with photos from her time on the set, her sometimes difficult and rather sad home life and the years after Willy Wonka. She still has the original copy of Charlie and the Chocolate Factory she auditioned with and had each actor write a special note next to a picture of their character. It is these special, one-of-a-kind pieces that add to the uniqueness of Cole’s book and give it a scrapbook feel. Copies of letters Cole wrote home detail the daily things the 13-year-old actress dealt with on set and back at the hotel. And using hindsight, her reflections are very amusing and poignant.

“Off-camera, I sought out this particular set, and often ate my lunch by the chocolate river whilst listening to the “Pure Imagination’ musical track that played in the background.”

The book reads like a conversation between friends. Cole is so honest about the excitement she feels for where the road will lead, her children’s lives and her own work as a psychotherapist working with kids and young adults. Although she demanded everything as Veruca Salt in Willy Wonka, readers will see that Julie Dawn Cole isn’t a bad egg at all! She has made the magic of the movie come alive for fans and in the process, shows what a wonderful person she grew up to be. This is a must read for fans of Willy Wonka, Veruca Salt, child actors and role models. You’ll be saying to your bookseller, “I want it now!”