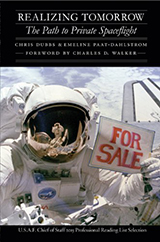 A New Call for Explorers

The scientist’s and explorer’s dream of spaceflight has been achieved to a degree in recent times as shown in Realizing Tomorrow, The Path to Private Spaceflight. Chris Dubbs and Emeline Paat-Dahlstrom recount the recent historical efforts by private organizations to get people out into space. Most have heard of The Space Race, the Apollo landings on the moon, and the space probes to our nearest planetary neighbors in space, but behind the headlines were the efforts of private organizations to develop the capability to take people beyond Earth’s gravity. With governments running out of funds, business efforts have been allowed to take up the baton and take us out into the sometimes wilderness that surrounds the planet.

“To the civilian space community, seeing an actual vehicle being tested and performing quite well reignited a glimmer of hope and excitement that cheap access to space was indeed around the corner.”

The book competes here, at least for science fiction fans, with the sense of wonder, action, aliens, and many others to be found in those lurid pages. Instead one will find the real adventure taken up by dreamers, explorers, entrepreneurs, and visionaries. All sorts of folks have been captivated by this adventure into this newly mapped territory. One finds how crowded these areas are now with new technology and foreign nations. There is sadly not much here about space debris and the efforts to keep nuclear power out of space.