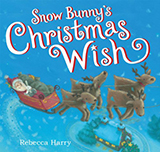 It’s winter in the forest and Snow Bunny is getting ready for Christmas. There is only one thing that she really wants – a friend! Snow Bunny decides that Santa Claus is just the person to ask to help make her wish come true. She writes her letter to Mr. Claus on Christmas Eve, but she is late getting to the mailbox! Using good problem solving skills, Snow Bunny comes up with a plan to get her letter to Santa all on her own. Find out what she decides to take along on her trip and how she decides to get to Santa’s house. On the way, Snow Bunny meets a group of bears ice-skating on a frozen pond. They seem to be having a blast – except one small, chilly bear cub that waits all alone on the side of the ice. A bit later, Snow Bunny meets a group of animal friends decorating a huge Christmas tree – except one small, lonely fox cub with no decoration of his own to hang. Can Snow Bunny do something to help the lonely little animals feel included?

This kind rabbit helps those she meets during her adventure out of the goodness of her heart. She doesn’t want or expect a “thank you.” Can Santa Claus make Snow Bunny’s wish come true? Can he find her a friend? In the end, he doesn’t need to because as he brings Snow Bunny home, guess who is waiting for her with happy smiles and warm hearts? All the new friends she met in the woods along the way to Santa’s house!

As soon as your young reader gets their hands on this beautiful hardcover book, they will immediately notice the cover’s unique design. Under the book’s title, Santa flies through the air in his sleigh, led by his loyal team of reindeer. Whirls and swirls of star-shaped snowflakes surround the characters. These stars are made from a special type of silver paper that adds a whole new magical dimension to the already stunning illustrations. And the magic doesn’t stop on the cover! Each page has certain spots that shimmer when the light hits the illustration in just the right way – the boughs of the trees are lined with sparkly snow, a frozen pond reflects the glowing light of the bright moon and Snow Bunny’s paw prints shine on the icy ground.