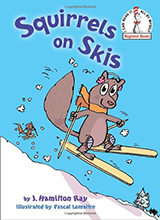 Squirrels on Skis is the latest book to join the Beginner Books series and its quirky rhyming prose and endearing plot are sure to make this addition an instant classic.

A quaint mountain town seems to have a squirrel problem and the townsfolk are not pleased, as “wherever they looked / there were squirrels on skis, / skiing in groups / of sixes and threes!” When the Mayor holds a town meeting, it is suggested that pest controller Stanley Powers take matters under control, but not everyone likes that idea. Instead, the Mayor gives young Sally Sue Breeze, a reporter with an inquisitive mind, twenty-four hours to solve the issue. She uses her imagination and skills to resolve the situation and keep both the townsfolk and squirrels happy.

“Nobody knew
how the mania grew.
First there was one,
and then there were two.”

Debut author J. Hamilton Ray has won two Emmy awards for his children’s television writing. The illustrations by Pascal Lemaitre are colorful and quirky and fit right in with the Beginner Books series made famous by Dr. Seuss. With loveable characters and imaginative pictorials, Squirrels on Skis is an engaging and fun read-aloud for early readers.