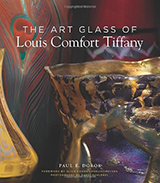 Twenty-five years of research resulted in The Art Glass of Louis Comfort Tiffany. The book opens with a history of how glass making evolved. Louis C. Tiffany was influenced by ancient cultures and Venetian artisans and this influence led to Tiffany creating Favrile Glass in the mid 1890’s. His experimentation led to producing pieces for collectors and connoisseurs. This was during a time when collecting and displaying artwork in one’s home became a popular thing to do. Louis declined to join the family business and instead wanted to be a professional artist. He became a successful painter and then decided to found an interior decorating firm which then became a leaded-glass window company. He signed an agreement with Heidt, the owner of a glasshouse in Brooklyn in 1881 that changed history. Tiffany participated heavily in design and production in Tiffany studios.

“Tiffany saw his own work as part of a larger continuum in making of glass, dating back to antiquity; indeed, he was inspired by vessels he had admired and collected both from ancient cultures and from sixteenth-century Venetian glasshouses.”

Since this reviewer knew nothing of the Tiffany story, it was fascinating to read how Tiffany evolved from artist to designer to glass maker. The 225 photos in this book are stunning and the research is comprehensive. Each photo is labeled with year produced, height, inscription and any other information available about the piece. There are thirteen chapters on the various Favrile Glass designs such as Flowerform, Byzantine and Peacock. Each piece of glass is unique and designed for aesthetics rather than function. This would be an ideal book for glass lovers, followers of the Tiffany style or anyone interested in learning about this art form and the amazing history behind this art.