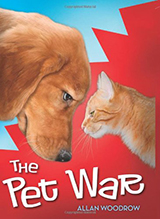 In The Pet War By Allan Woodrow, could an everyday argument between brother and sister be turned into a one month war? An eleven-year-old boy named Otto wants a dog. His twelve-year-old sister wants a cat. So begins the battle. Otto has trouble earning money at first, but when he starts his dog walking he has almost enough money for a dog. But his sister is close on his tail. Then when he is so close to earning the $500 he needs to get a dog, he loses a portion of his money and can’t figure how to earn it back.  The Pet War begins as a story of war but as the story progresses it turns into a story of sibling helping a sibling.