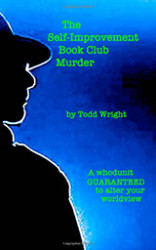 This is not a typical murder mystery novel. Yes, there is a murder and detectives who are trying to solve the case, but the murder is superfluous to the point of the novel. The Self-Improvement Book Club Murder is the first novel written by Todd Wright, a lawyer and retired naval officer who has taken an interest in the Self-Improvement genre. The compendium of the Self-Improvement Philosophy and its history is exposed to the reader through the entertaining medium of a murder mystery. For students of philosophy who typically fall asleep within three minutes of opening a text book, this novel is the remedy.

Two detectives, Bookman and Berg (names inspired by the 1990s television show Seinfeld) attempt to solve the murder of a woman who happens to be a member of a Self-Improvement Book Club. The book club is unique because none of the members will read each other’s contributions to the club. Each character is thereafter defined by the Book they have obsessed over presenting to the club. The two detectives attempting to solve the case represent the variety of perspectives non-initiates might have. One detective is a middle aged man, strong in his religious faith who approaches this knowledge with a jaundiced, disbelieving eye. The other one is a younger man, eagerly searching for answers to his life’s failings. As the detectives question witnesses, delve into the life of the victim and interact with each other, they clarify not only the case but the nature of reality. Bookman and Berg come away from the case irreparably changed by having gained this new knowledge. Whether you are an avid reader of Zen and the Art of Motorcycle Maintenance or new to these types of books, you will be riveted to the story for one reason or another. And soon you may be introducing this book to a book club of your own.