Tribulation: A Novel of the Near Future 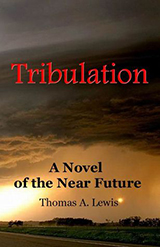 Thomas A. Lewis, a reporter and environmentalist, is convinced that the world is running towards a catastrophe that our modern industrial civilization will not survive. His recent fictional book Tribulation: A Novel of the Near Future follows his previous nonfictional work titled Brace for Impact: Surviving the Crash of the Industrial Age. According to the author, many civilizations have died by abusing their own resources. And now the world we know is on the verge of a new catastrophe, one that can happen in five to ten years. Despite many warnings, governments and common people do nothing to improve the environment. And even intelligent people do not believe in a nearing disaster. Tribulation is a story about a June 11, 2021 crash.

“We had allowed ourselves to become fatally distracted from reality.”

In Lewis’ 2021, a lot of disastrous events have already happened in the world. The rising sea water and global warming has led to a famine in Africa and South America. The United States has nuked Iran and there is tension with Russia and Canada about oil rigs in the Arctic Ocean. So when Hurricane Seven, more powerful than Katrina, destroys the southern United States, the government has no resources or ability to save people lives. All essential life services, like electricity, fuel and food supplies stop and the disaster spreads around the world.

The subject of this book is not only about the idea of physically surviving. Even if you do not share the author’s view on global warming, the moral and ethical questions raised here are important. Also the narrator is engaging, the language rich, the descriptions vivid and the book interesting to more than just devoted environmentalists.