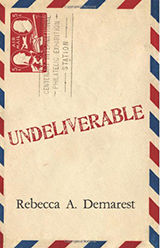 Rebecca A. Demarest’s new book Undeliverable is not your average debut novel. The book centers around the lengths that Benjamin Grant will go to when his five-year-old son disappears and has been missing for one year. The reason that this novel isn’t your average debut novel is because Demarest has partnered with the National Center for Missing and Exploited Children. For every book purchased, $1 of the cover price will be donated to the Center in hopes of finding missing children.

When Benjamin and his wife become pregnant, all they can think about are the life lessons they will teach their son. They imagine teaching him how to play catch and wonder what kind of dog they will get. However, when their son goes missing, everything changes. Benjamin’s search has a dramatic effect on his life. He loses his job, his wife leaves him and he becomes homeless. When he does find a job at the Post Office, he befriends a handful of people who may be able help in his journey to find his son. Sylvia is a kleptomaniac artist and Gertrude Bium gives Benjamin and Sylvia instructions on how to navigate the maze they about to face.

Demarest’s writing is sharp and witty. Her book is a great read with a bit of social conscience. While I was reading, I felt as if Demarest was taking me on a wild ride, a ride that I enjoyed and met a bunch of cool people along the way. From Gertrude to Sylvia – the characters are a great group of people. Benjamin faces struggles throughout the investigation, but in the end…well, read it and I think that you will enjoy it as much as I did.