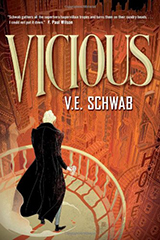 When Heroes are Sometimes Villains

College roommates Victor and Eli decided to turn their theoretical thesis on ExtraOrdinary people into practical application. Instead of simply looking for people with ExtraOrdinary abilities, they decided to become EO themselves, but first they had to die. Ten years later, Victor has broken out of jail and is determined to hunt down Eli in order to repay him for an old betrayal. Meanwhile, Eli has begun a quest to rid the world of unnatural EOs: everyone except himself. Both men have had years to perfect their powerful abilities and the question remains, who will survive the encounter?

Vicious is at heart a study of villains. V. E. Schwab writes from both characters perspectives allowing the readers to see the motivations behind their actions. The entire cast of characters have unique personalities and motivations, but Victor and Eli’s complicated relationship holds center stage. This is an extremely fast paced book that is nearly impossible to put down and is recommended for readers of science fiction, fantasy, and anyone interested in the concept of what defines who the heroes are, and who really is a villain.