We Are What We Pretend To Be: The First and Last Works 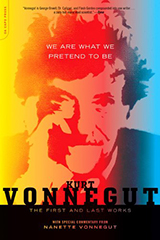 We Are What We Pretend to Be, contains two previously unpublished stories by Kurt Vonnegut. The first, Basic Training, was his first novella. Haley Brandon a sixteen-year-old youth whose adoptive parents die in an accident. He moves from the city to the country to live with his uncle and cousins whom he has never met. It is a difficult adjustment for him. The story is moderately paced with a balance of action and reflection and a hopeful ending. The second story, If God Were Alive Today, bears a darker tone.

“”Kitty’s run off with Roy, and these two helped her,” said Annie, livid. “What’ll we do?”
The General breathed heavily, his eyes moving about the small room-from Annie, to the ladder and luggage, to Haley and Hope. “I’ll see you two downstairs in the sunroom in fifteen minutes, on the dot,” he said.”

Gil Berman is a middle-aged stand-up comedian born into a wealthy, dysfunctional family. His mother’s mind drifts in and out of time and his father eventually commits suicide. This story carries no semblance of a hopeful ending. Both stories delve into the lives, minds and choices of young men left without parents. The first has a chance for belonging; the second is afraid of belonging. Both stories are well-written reflections of the times in which Vonnegut was writing and are well worth the read.