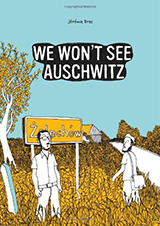 We Won’t See Auschwitz by Jeremie Dres is a graphic novel depicting the true life trip two brothers take to their grandmothers homeland of Poland. They make the trip the year after she died in order to rediscover the country she had to leave during World War II. The brothers make a choice not to visit Auschwitz. Instead, they decide to make the trip about what it means to be a Jew in Poland now, not what it meant then. The trip is full of revelations for the brothers as they discover each other and the world of their ancestors, and they come to realize that – unlike they thought – they are not the only ones searching.

The story is very interesting. It brings to light how Poland has moved forward since the war and how both Jews and Gentiles alike have tried to rebuild and heal. The illustrations are a little on the simplistic side and sometimes some of the characters can be a little too similar. Even with this confusion the plot is not hard to follow. There are several Yiddish phrases that are fun to learn and the photographs in the back of the book of Jeremie’s family and his trip help tie everything together.