A Field Guide to American Houses: The Definitive Guide to Identifying and Understanding America’s Domestic Architecture by Virginia Savage McAlester 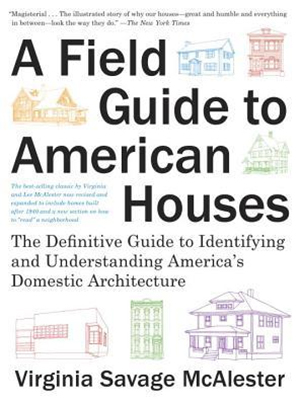 Virginia Savage McAlester’s A Field Guide to America’s Houses is the definitive guide to American domestic architecture. Although the book is designed to use as a reference text in identifying houses that you might spot in your daily life, it has accessible and well-written texts that will keep an architectural nut interested, even without a particular house in mind. This book has extensive, very clear diagrams, which help illustrate terms and concepts even for readers who are not familiar with architectural vocabulary. This new, updated version of the classic pays more attention to houses built in the 20th century. The classic version of this book primarily addresses houses built before the second World War, and this version expands the brief section on later 20th century architecture into a full blown chapter that acknowledges many of the developments (larger and more complex building styles particularly) that take place in that period. This book is slightly expensive, but for anyone who is interested in the ways and reasons American houses look the way they do it is a classical and a very approachable for aficionados at every level.