A Human Necklace: The African Diaspora and Paule Marshall’s Fiction by Moira Ferguson 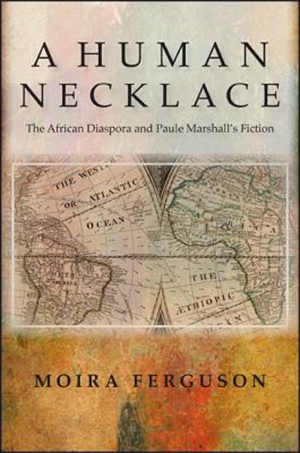 Paule Marshall is one the major late-20th Century African-American writers. In a changing society, she helps bring to life the changing nature of race, home, and culture. While many books of literary criticism are published every year, it is always interesting to read a book of literary criticism on a living author, and one who wrote in the late-20th Century. This book is the first major work of literary criticism on Paule Marshall, and it is interesting because it truly does break new ground. Moira Ferguson explores each of Paule Marhsall’s novels in depth, from the first one, to the most recent one. Each book gets its own chapter, as Mrs. Ferguson explores the themes and concepts. We get to explore, and grow, along with Mrs. Ferguson as Paule Marshall’s fiction becomes more and more intertwined with the concept of the diaspora, and whether it is ever possible to go home again; and home is a common theme across the decades.

While the average reader might look down on this book, this book will be treasured by academics and students alike. For its easy to understand prose, and its approachability of difficult concepts. This opens the door for further analysis of Paule Marhsall.