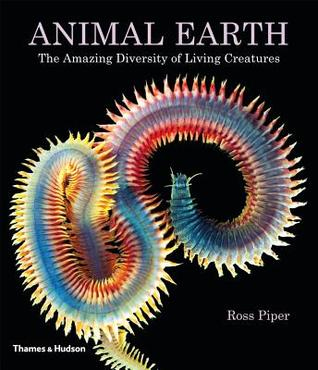 Animal Earth: The Amazing Diversity of Living Creatures is an ode to those critters without backbones that make up the bulk of animal life on our planet. When one says “Animal Kingdom,” they are likely to picture large vertebrate animals, likely mammals, such as elephants, bears, and gorillas. The fact is large vertebrate animals represent a very slim layer of Earth’s species. Through a wealth of photographs and informational text, zoologist Ross Piper introduces the reader to many of these invertebrates, sharing how they fit in with other animals in the evolutionary tree of life, as well as their characteristics, behavior, and the role they place in ecology. Piper begins Animal Earth by quoting Charles Darwin’s last words from On the Origin of Species: “… from so simple a beginning endless forms most beautiful and most wonderful have been, and are being, evolved.” And as Piper notes, we share the planet with these endless forms, and have within us the power to protect the diversity of animal life on Earth. How can we protect what we do not know? Animal Earth should be in every school and public library, and should be checked out continuously by curious young folk wanting to know who some of their long-lost relatives are, and where they can be found on our shared planet.