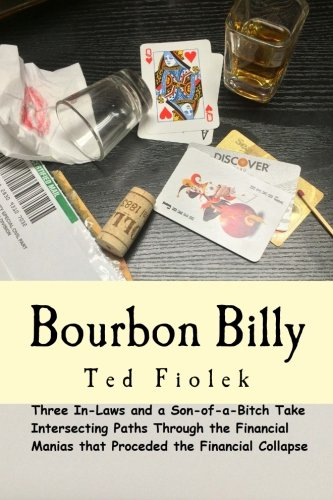 Remember when the dot-com bubble hadn’t burst, no mortgage went unapproved and Enron was named “America’s Most Innovative Company” by Fortune magazine? Ah, the late 1990s and early 2000s. That’s when we meet Willie, Bullo, Tony and Sammy, the main characters in the social satire, Bourbon Billy.

Set in New Jersey, Bourbon Billy follows these four aspiring white collar criminals as they try to take advantage of every financial loophole, scam and scheme in the book. From multi-level marketing schemes and card counting to house flipping and bankruptcy fraud, the three crooked accountants and one ethically-challenged lawyer dart in and out of various financial and personal disasters.

Author Ted Fiolek, a practicing accountant and financial commentator, skillfully weaves the darkly funny stories of these four characters, all of whom are related to each other either through marriage or by their various business dealings. Willie practices crooked accounting and sidelines as a part-time bartender. He’s married to Leah, the cousin of Tony, a burned out accountant ready to try his hand at the restaurant business. Bullo, a retired New York City fireman, is a part-time accountant, full-time bully and evil boss of Willie’s for a time. Finally, there’s Sammy, the shady lawyer who is called on to defend the accountants time and time again. He’s Tony’s wife’s cousin.

While all the individual vignettes within the larger story are entertaining, the novel is disjointed, and it can be difficult to follow who’s who. It begs for a “family” tree to help the reader keep relationships and connections straight. This effect is exacerbated by the inclusion of several fully-developed minor characters Fiolek throws in, like the promiscuous but considerate Fannie LaBrutto and Bubba Tomatoes, a terrifying animal rights extremist. While they’re rich characters that have some really great laughs connected to them, they’re also a bit distracting. Even so, Bourbon Billy is a fun read that may make you look at your accountant a little differently next tax season.