Cain Braswell: A Story of Love & Murder in the Old West by Joseph Gavett 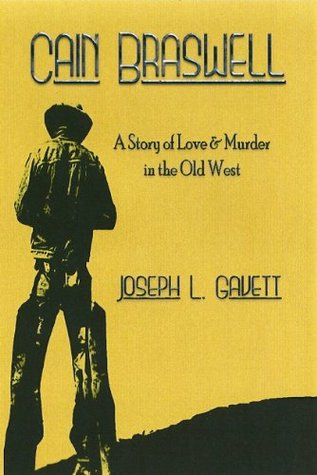 In the days before the Civil War, Ethan Braswell, a wealthy, married plantation owner, fathers children with both his wife, Josephine, and Lily, one of his slaves. While Josephine’s child dies soon after birth, Lily’s twin boys survive. Able has his mother’s complexion and the other baby, Cain, is white as snow. In order to protect Josephine from the truth of her baby’s fate, Ethan takes Cain from Lily and gives him to Josephine. Thus Cain is raised as a Braswell. He doesn’t find out that he is really the biological son of the slave who raised him until adulthood.

When the war comes, Ethan enlists and dies in a prison with other Confederate soldiers. Cain enlists soon after, perhaps to avenge his father, and becomes famous for his skill with a gun. Upon returning home from the war, Cain finds a scene of destruction, his childhood home in ruins, and Lily, the closest thing to a mother he has ever known (Josephine died when he was a child  never caring much for his stepson), skinned, and hanging from a ceiling rafter. It is this event—and the subsequent discovery of his birth mother’s identity—that sets Cain on a journey not only to avenge the death of his family, but to punish cruelty and exterminate killers…by killing them.

Author Joseph L. Gavett has been writing and publishing books for nearly two decades. Cain Braswell: A Story of Love & Murder in the Old West is a well-thought out novel, though the ultimate motivation of its title character seems at times murky. Like most self-published novels, Cain Braswell would be well-served by being picked over by an editor, as there are some instances of awkward wording as well as occasional spelling and grammatical errors. That said, the story is a classic one—outlaws, murderers getting their just desserts at the hands of a sympathetic, mysterious hero—and Gavett has handled his tale of morality, justice, murder, and love well. Cain Braswell is a fun read.