God and Charles Dickens: Recovering the Christian Voice of a Classic Author by Gary L. Colledge 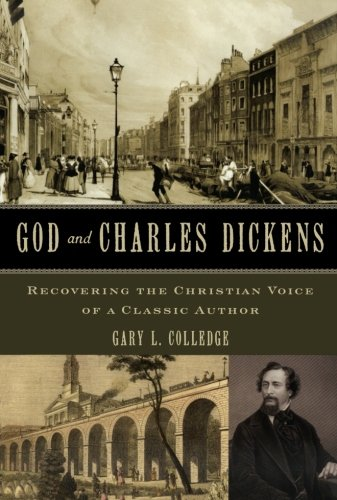 For those with a love of Charles Dickens’ Victorian-era novels, Gary L. Colledge’s God and Charles Dickens: Recovering the Christian Voice of a Classic Author offers a new window into the intentionality of Dickens’ Christian faith. An adjunct professor at Moody Bible Institute and Walsh University, Colledge dismisses those readers who mistake Dickens’ rebellion for agnosticism or atheism: “Many Dickens enthusiasts and fans with whom I speak typically fall into two camps when it concerns Dickens and religion: they either believe Dickens flagrantly rejected religion, or they are simply unaware of any serious religious aspects of his writing, apart from his criticisms of the clergy and the church and his apparent disapproval of both” (23).

“Dickens’s real Christianity was neither a literary device nor a pious facade. He worked tirelessly on behalf of others, according to his Christian convictions concerning the imitation of the teaching and the character of Jesus.”

Dickens believed in a personal faith in Jesus Christ, Colledge argues, and therefore eschewed many of the doctrines, dogma, and devotional exercises deemed necessary by the Church. Colledge discusses various aspects of Dickens’ faith from his consideration of Jesus to Christ’s resurrection to what Dickens himself called “Real Christianity.” While Colledge’s research is admirable, the book is academic and at times reads like a re-worked dissertation, relying so much on what others have said that Colledge’s voice slides to the wings. Perhaps a future project for Colledge would be to dive more deeply into Dickens’ novels, one by one, considering the presence of Christ and faith amidst the satire rather than allowing the words of fellow academicians to dominate.