If Wishes Were Earls: Rhymes With Love by Elizabeth Boyle 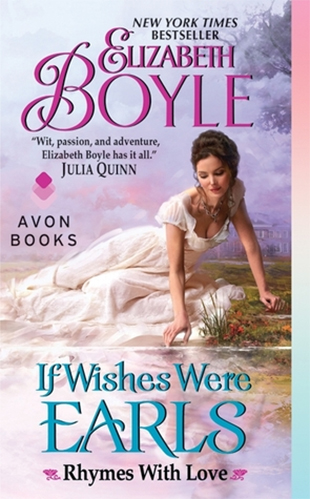 For those who often breathlessly anticipate the next book in a series, you know sometimes the anticipation is met with disappointment. The characters aren’t as colorful nor the resolution as satisfying as you had hoped it would be when you were first introduced to them. Not so for If Wishes Were Earls by Elizabeth Boyle! Every moment spent with the characters first introduced in Along Came a Duke was a delight.

Harriet Hathaway, hopeless romantic, adventure seeker and tomboy has been in love with the suspiciously idiotic Earl of Roxley for most of their lives. After helping her two best friends find their matches, it is her turn for happiness, if only the unwilling earl would agree. Through blackmail, treasure hunting, gambling, and hidden identities their story unfolds. Unlike the other novels in the Rhymes with Love series, this one tells a lot of back story as it drifts in and out of chronological order. The chapter headers are a romantic tale of their own: Boyle borrows, as Harriet’s favorite reading material, a book series written by another of her heroines called the Darby Tales. The headers are quotes from these fictional tales. In her attempts to emulate her plucky fictional heroine, Harriet pulls Roxley into hilarity – no matter how he tries to resist her, she just will not relent. And you won’t believe what his first name turns out to be!

A fun novel that will leave the heart pitter-pattering, If Wishes Were Earls is an exciting romp with two people who seem destined for each other but can do nothing but keep themselves apart.