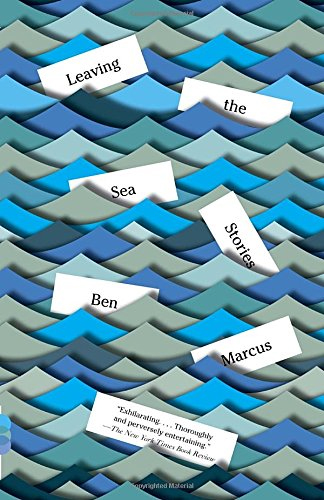 The language in Leaving the Sea by Ben Marcus is sharp, crisp and clear. Each story appears like a window on the characters, allowing enough contact for the reader to get a clear if brief and imprecise view.

“But Julian only ever picked at what polluted his plate, as if dissecting roadkill for shards of glass. His father, especially after his mother traveled underground to spend the rest of eternity inside a luxury coffin where no one could disturb her again, removed Julian’s untouched food and scraped it into the trash. Only to try again a few hours later, smiling and kind.”

The first stories have settings, landscapes and issues that are realistic and even relatable. The characters are self-absorbed and introspective, their stories complex and rich with edges of conflict. Paul returns home after a long absence and has as much difficulty sharing whom he has become as his family has difficulty believing him. Fleming is a poorly rated writing teacher on a cruise ship. Julian has an undiagnosed autoimmune disease for which treatment he’s traveled to Germany. Mather is attempting to co-parent his sickly infant son and having little luck.

The imagery of later stories gets experimental and poetic. Relating to the characters is more difficult. The dark, lost, wandering male protagonist is one thread that carries through all of the stories. Marcus’s incredible command of language makes these stories worth the read.