Lunch Lady and the Schoolwide Scuffle by Jarrett J. Krosoczka 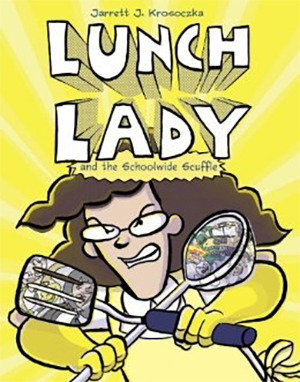 The cover of Lunch Lady and the Schoolwide Scuffle is like a comic book: it is colorful and it has a lot of detail. The book is a mix between a graphic novel and a comic book, and the pictures are printed in yellow, black, and white. It is meant for all ages above the age of four probably. The story is about a lunch lady who fights crime against Godzilla buses! She is teamed up with people who are using the characters from books as their weapon. But really, it’s an energizing story. One of my favorite characters is Buszilla, who looks like a Transformer with monstrous teeth and was the person or thing that stood out the most. Probably because he’s really cool and breaths fire.

This book is part of a series, but it doesn’t have to be read in order. I would recommend this book to a friend because I think they would really like it since it is an easy, but enjoyable book to read. I also think they would enjoy it because it is very funny.