Man & the Sea: Shipwrecks of Southwest Washington and Northwest Oregon 1792-1949 by Wayne O’Neil 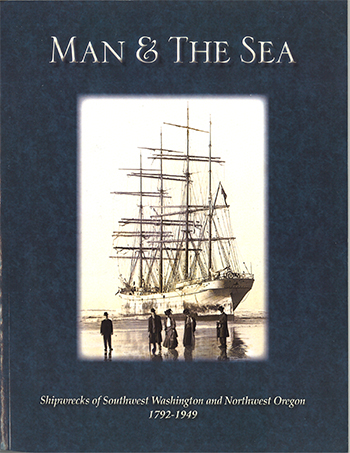 Readers who have an interest in maritime history or are residents of Oregon and Washington and familiar with the Columbia River will find this book fascinating. The author, Wayne O’Neil, confines his area of interest to the mouth of the Columbia River and the surrounding areas from 1792 to 1949. During this period, O’Neil cites the details of a staggering 236 shipwrecks. Many lives were lost along with ships big and small and the wide variety of cargos they were transporting. The book gives a detailed account of each shipwreck; for example, visitors to Fort Stevens State Park in Oregon can still see a portion of the Peter Iredale buried in the sand along the beach. This beautiful, four-masted British bark was 287 feet in length and weighed 2075 tons. Built in 1890, the Iredale was 28 days out of Salina Cruz when it grounded on Clatsop Beach in October 1906. The ship was eventually broken up and sold as scrap.

“The schooner (Point Loma, 1896) is a total wreck, having broken up soon after she stranded. Her cargo of lumber is strewn along the beach for a distance of several miles while not a vestige of the schooner remains.”

Man & the Sea also includes 183 rare historical pictures. This reviewer found the pictures, illustrations and maps to be of particular interest. The Columbia River Bar is considered a dangerous passage today, even with a jetty designed to help tame the long Pacific Ocean swells and navigational buoys to help the captains avoid the ever-changing currents and sandbars. One can imagine the hardships the captains, crews and passengers sailing on wooden ships must have faced even when the weather was cooperating, which wasn’t very often. This book presents a fascinating period in the history of the Northwest.