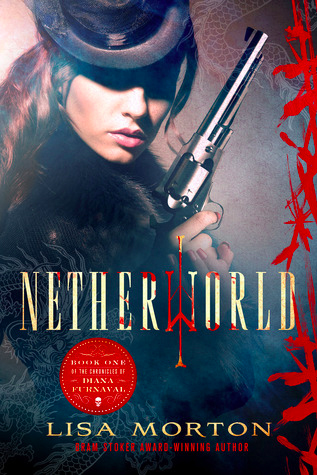 Lisa Morton’s Netherworld is book one in a nineteenth-century Victorian historical fiction and fantasy series that follows the adventures of Lady Diana Furnaval on her quest to close the gateways to the Netherworld. After her husband’s untimely demise, Lady Diana is tasked with being a gatekeeper, but as the demonic entities from the other side make more frequent and violent crossings, she realizes that something terrible is brewing. Warned never to cross over into the Netherworld, Diana’s conviction is tested when she learns that her husband may still reside on the other side of the gateways.

“Night has now fallen, and I’ve just become aware of some great commotion downstairs. I hear shouting, cries of alarm and of pain. A woman just shrieked; I can’t imagine that horrid sound coming from anything not facing its own demise. Footsteps are coming up the stairs. Towards my room. Oh God, the smell…”

Netherworld contains elements of historical fiction, fantasy and horror, making it an amusing and sometimes creepy read. There is a large amount of world travel as Diana heads to India, China, California, Ireland and London over the course of her quest, which leaves plenty of room for culture shock and societal observations. While not terribly deep and somewhat banal in places, Netherworld is a fast-paced romp through a paranormal world.