One and Only: The Untold Story of On the Road and LuAnne Henderson, the Woman Who Started Jack Kerouac and Neal Cassady on Their Journey by Gerald Nicosia and Anne Marie Santos 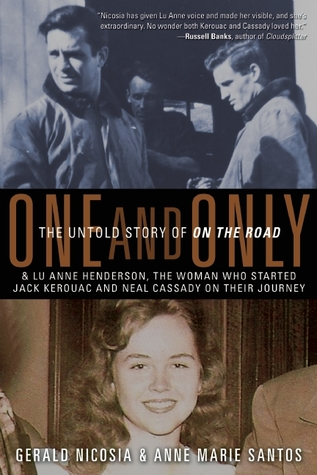 One of the most fascinating characters in Jack Kerouac’s semi-autobiographical novel On the Road is Mary Lou who is often on the road with him and Neal Cassady (Dean Moriarty). Many friends and wives have shared their recollections of these two men during this time period, but there’s finally a chance to hear from the woman who inspired the character Mary Lou, Lu Anne Henderson, in One and Only: The Untold Story of On the Road by Kerouac’s biographer Gerald Nicosia and Henderson’s daughter Anne Marie Santos.

“To her, the most important thing was finding out why people acted in certain ways. Once you understood them, she felt, their actions almost always made perfect sense. They stopped being freaks or criminals or outcasts or whatever else the world had labeled them as, and they became instead someone like yourself— a friend.”

The biography is broken into parts, primarily a word-for-word transcribed interview Nicosia did with Henderson decades ago. Other sections include a preface about the recent Walter Salles’s On the Road movie, Nicosia’s impression of Henderson, a letter Henderson wrote Cassady when she thought she was about to die, a short essay on how Henderson helped break through traditional female roles, Al Hinkle’s recollections of Henderson and Santos’s recollections of her mother. This book is for anyone who loves On the Road or interested in the Beat Generation.