Scared Stiff: Everything You Need to Know About 50 Famous Phobias by Sara Latta, illustrated by G. E. Gallas 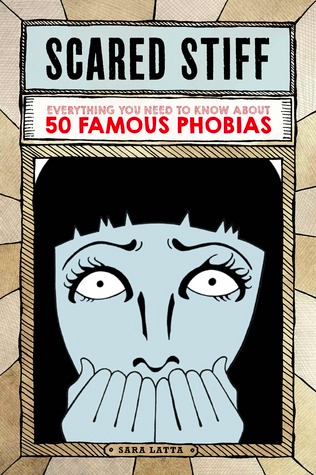 When I first looked at the book, I thought it was a scary book because it just says Scared Stiff and has a cartoon face of a blue girl who looks scared. Then you see it says the book is about fifty phobias, which is pretty cool. The author gives readers a nice introduction about phobias and I learned that phobia is a Greek word, phobos, meaning “fear” or “terror” and was the name of a God who would scare the Greek’s enemies during battle.

“…a whopping 40% of iPhone users would rather have rotting teeth than give up their devices.”

Some of the phobias were easy to relate to like nyctophobia; nyktos meaning “night” in Greek. It is a fear of the dark. I have this and don’t even like going down the hallway at night! The funniest phobia is nomophobia, which is a fear of being out of mobile phone contact; nomo meaning “no mobile.” I think many people probably have this problem, as everybody has a cell phone and is addicted to them.

There are phobias about left handed people, fear of buttons, and even fear of dolls, but at the end the author gives you ways to overcome your fears which definitely makes this book worth five stars and a must-have for all kids!