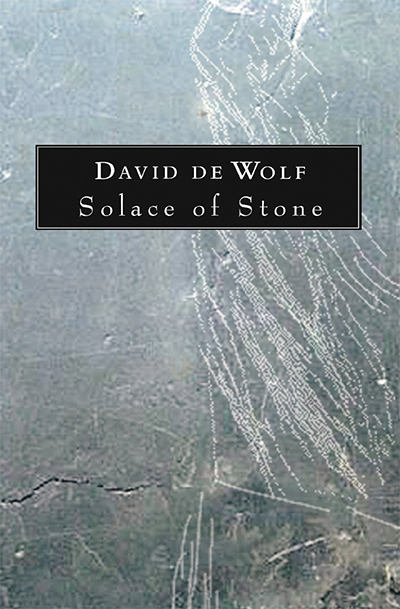 At the very beginning of Solace of Stone, George Nobel and Charlotte Vermeer meet in an airport and rather uncomfortably renew their acquaintance on a shared flight. Then the story abruptly shifts back in time where author David de Wolf details their separate lives and tells how Nobel and Vermeer came to meet. Nobel is a father in a failing marriage and an architect working on a project to redesign a Sicilian town center destroyed by an earthquake. He carries the guilt he feels about something he did over a decade ago, something for which he is being blackmailed. Vermeer has given up on love thanks to horrid treatment by her stepfather. She embarks almost irrationally on a doomed affair with an opera singer. As the affair ends, she lands the task of cataloging a puzzling relief from South America of a woman in mid-flight over a sharp point. While doing this, Vermeer begins to perceive the relief as symbolic of herself.

While this is technically an accurate summary of the plotline, it does not begin to do the novel justice. It is clear that de Wolf has a serious appreciation for architecture, opera and music. The reader may even develop an insatiable desire to listen to Brahms’ Fourth Symphony. Even deeper is his passion for philosophy and the big questions about life. It is evident that he took great pains to understand his characters and create elaborate back stories. These elements combine to create a dense novel. At times, it feels as though every breath or sip of coffee is imbued with significance or provided as a opportunity to flashback to some small incident in the character’s past. That said, Nobel and Vermeer are haunting characters, and their struggles to make sense of their lives and their places in the world stay with the reader. For those up for a slow but thought-provoking read, Solace of Stone may prove satisfying.