Something More Than Night by Ian Tregillis 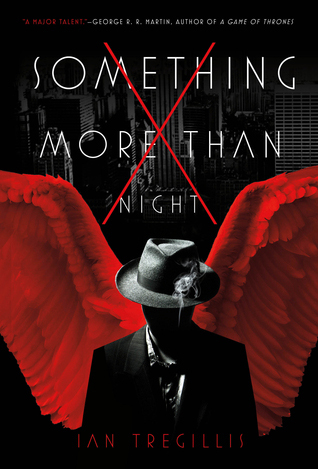 Something More Than Night begins with a bang as the earth trembles with aftershocks from the death of the angel Gabriel. Bayliss, a fallen angel, has been roped into finding a replacement among the humans, as Gabriel’s death left a void that could upset creation. Molly’s life is turned upside down when she finds herself dead, and discovers she has been uplifted into the heavenly Choir. Gabriel’s death is only the beginning of a much bigger plot, leaving Bayliss and Molly trapped in the middle of an ancient feud and an extremely complicated con.

“Molly grasped at the memory fragment. Her father’s old paper weight had come in two pieces: the base with the dial and a cone for speaking, and a separate earpiece on a cord. The cord stretched like taffy and snapped; the earpiece rolled away past her first skiing lesson and fell into the crevice between the taste of homemade lasagna and the frustration caused by a corrupted e-book file.”

Ian Tregillis’ writing is hypnotic and full of conflicting sensory images. A bizarre combination of crime noir, science fiction, and a crash course in physics, Something More Than Night is a hodgepodge of ideas and concepts that will confuse and delight readers. The story is told through two narrators, Bayliss and Molly, both with very distinctive styles and observations. While some readers may find themselves a bit disappointed with the ending, Something More Than Night is a charged and extremely eloquent read.