Song of the Vikings: Snorri and the Making of Norse Myths by Nancy Marie Brown 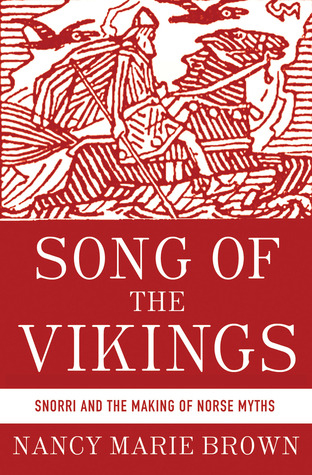 Snorri Sturluson is the unsung literary hero of western civilization. Our modern image of Vikings and much of our knowledge about Norse mythology comes from his sagas, including the Edda and Heimskringla. Without Snorri, there would be no Lord of the Rings, no Ride of the Valkyries. We’d barely recognize Odin or Thor, or know of Valhalla or Ragnarok. Yet Snorri’s sagas were not written as histories. Rather, they were tools for Snorri’s advancement, intended for kings. His authorial hand is everywhere, and only by knowing the man and his times can the traditions be distinguished from the embellishments. Song of the Vikings brilliantly reveals Snorri as a complex man and provides the context and background needed to understand the mythology and poetics of the sagas, as well as the historical culture and landscape of medieval Icelanders. Nancy Marie Brown’s accessible prose and well-structured narrative traces Snorri’s life as a master poet and wealthy chieftain, a land-owner and law-speaker, and a politically ambitious man who controlled three quarters of Iceland before he was murdered in the darkness of his cellar. This is a fascinating and adventurous read that brings a forgotten poet and a misunderstood period of history to life.