Star Trek Federation: The First 150 Years by David A. Goodman 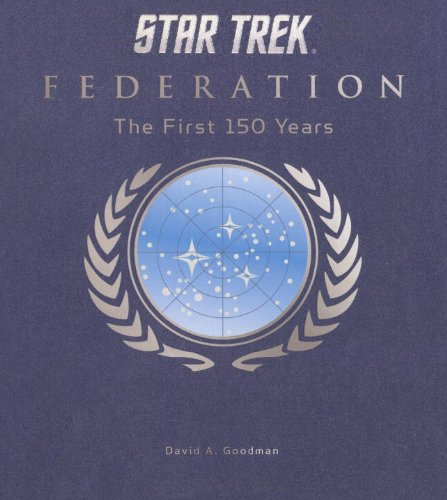 Federation: The First 150 years is a well-researched volume that records the history of Starfleet and The United Federation of Planets back to the Eugenics Wars that set the stage for World War III and led to Zefram Cochrane creating the first working Warp Engine through to the more recent destruction of Praxis and the various murders that delayed the Khitomer Accords from taking place. It even includes a small bit on Solkar’s speech at the 150th anniversary.

Pulling excerpts from recently declassified files, official autobiographies and a wide range of other high-profile sources – including direct interviews with the likes of Jonathan Archer, James Kirk and Robert April, – the real story of what happened at Talos IV (for the first time!) and more are finally collected in this wonderful, hardbound text.

The wonderful art that supplements the text comes from a variety of sources, and includes such art as the Romulan “Victory at Algeron,” which was commissioned for the Romulan Senate. This history holds a predominantly un-biased focus, however it is very clear that the human author at points holds some bias. History is written by the victors, after all, right?

A real-world look at this text reveals a carefully written future-history that fills in the holes between various Star Trek films and episodes. The art is nice at times, and at other times annoying – the same goes for the occasional spreads that break up the text at times. While informative, it proves difficult to jump from the main narrative of the author to an excerpt or private note between individuals. This Star Trek volume is certainly worth checking out for anyone who is more than just a casual fan, but the average viewer who watches a few episodes or so every now and then may find themselves a bit more confused by the text.