The Ancient Whisper by M. A. Appleby 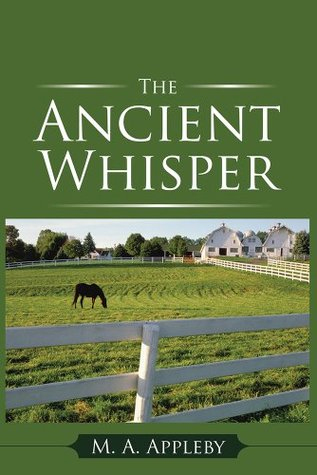 In The Ancient Whisper, M. A. Appleby takes the reader on a wild ride. This story opens as Ellen Andress wakes slowly from a drug-induced stupor in a Middle Eastern country. How she got there is a mystery to her. The last thing she remembers is being in a bathroom at the Kauai airport as she and her husband were returning to their children after an island vacation. Over time, her captors reveal that her husband is dead and that she cannot return home for reasons no one will explain. Eventually, she does return to the United States, where two people who identify themselves as FBI agents immediately sweep her into a witness protection program. They leave her in a decrepit Virginia horse farm which she owns in partnership with some questionable characters. Within months, Ellen’s mother and children change their identities and join her on the farm. However, the story does not end here, as both strange occurrences and amazing good fortune continue to follow this family.

This novel has weaknesses. First, it would benefit from proofreading for grammatical errors. Furthermore, some of the characters’ dialogue and actions are stilted or inappropriate. For example, the reader will find it hard to believe a CIA agent would blow a kiss to the person he is protecting. Finally, at times the plot stretches beyond reality. Buying a ramshackle estate that is horribly in debt and finding over two million dollars in antiques inside is incredible. Despite these weaknesses, however, Appleby has written a very entertaining story that draws the reader in and pushes him or her to finish in order to understand how the author can tie together so many loose ends.

In the acknowledgements, Appleby alludes to a sequel. With guidance from an experienced editor, that sequel could prove to be promising.