The Complete Guide to Being Evil by Laura Stephenson 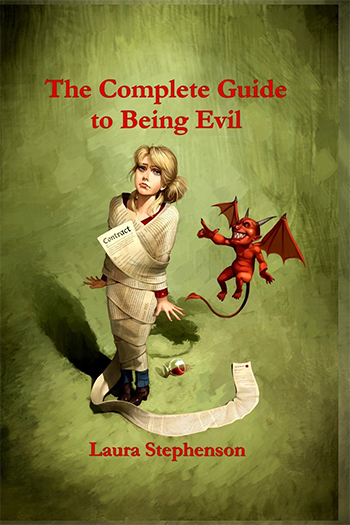 Kalara is new to Manhattan and ready to experience the high life. Coming from a rich family in Chicago, she is sure that she will be accepted into the glittering circle of the Manhattan socialites. When she attends her first swanky party, however, she discovers that she and the host, Mr. Whitcomb, share a secret: they are both mages. Mr. Whitcomb doesn’t take kindly to Kalara’s revelation and warns her to leave town. Kalara is furious and instead of leaving decides to make a deal with a devil to murder Mr. Whitcomb. Confident in her ability to deal well with the underworld, Kalara’s expectations definitely aren’t met when Evander knocks on her door. A deviling or devil in training, Evander is dealing with his own crisis…he has failed his devil exams and his father has written him off as a failure. Making a deal with a mortal is the only way he can redeem himself. The pair agree on a contract and Evander works to give Kalara more power in exchange for Whitcomb’s heart and the heart of an enemy. If the deal is not met, then Kalara faces certain death herself.

The Complete Guide to Being Evil is a new book by author Laura Stephenson. The best part of the book is the storyline of Evander. He is sweet and endearing and the reader feels for him as he tries to navigate a world for which he is too kind and too human. His story arc is satisfying as the reader can see him change and realize that he can make his own choices and walk away from the life others have chosen for him. Unfortunately the rest of the book is less successful. Kalara as a main character is frankly horrible. She acts like a petulant child throughout most of the book: she is easily insulted, has tantrums, is overly confident in her intelligence and skill and is generally grating (think of a magical version of Paris Hilton). She also has a life-changing character arc and ultimately realizes that she wants to live a better life. She is written as being so shallow throughout the bulk of the book, however, that her life changes don’t seem genuine and feel more like something she is trying on for the season. It’s puzzling why Whitcomb would waste his time dealing with an irritant like Kalara. Additionally the side plots of Kalara’s maid partying too hard and the view from the rat’s perspective are detractor’s from the main plot and don’t blend well with the rest of the story. Had the book had Evander as it’s main character and focus, it would have been much more enjoyable and interesting. Unfortunately with Kalara at the center, the result is more irritation than interest or enjoyment.